Tears are streaming down his round cheeks. The fat glossy cheeks are rosy from anger and his lower lip is shivering. He’s looking at me like I’ve committed the biggest betrayal of his 15 months life. He turns away from me and walks towards the window. Stepping up on his toy box, pushing his chubby hand against the window and whispers… “Moomoo. Moomoo.” He turns around, looks at me with lightning coming out of his eyes and says, much louder, “Moomoo!”
My crime? I opened an old water bottle which contained nothing whitout making the sound “pssschhhh”. Igge loves the “pssschhh” – sound more than anything and every time you open something, anything, you have to make that sound or you will get punished by a baby-made-lightning-storm.

Looking for Moomoo to come rescue him from his evil mother who tried to take his bear hat off. Alright, Child, keep it on. It is 25,8 degrees Celsius inside, after all.

Yesterday our little family had a BBQ outside our apartment building. The sun was shining, the birds were tweeting, the vegan skewers were sizzling and The Child was… Not there. He was dedicated to go inside, so he had gotten my keys and tried to unlock the front door to go inside. When I made him sit down by the table because his dinner was served and cut up in perfect cubes and the sauce was on the side and no food was touching the other foods etc etc, he broke down in a tantrum. I didn’t give in and made him sit down so we could all eat together. Once he started to accept that fact he looked at me, still furious about having to sit still and have delicious dinner, and with his teeth clinched together he growled “Miimii. Miimii.” Then it got louder and louder until he was shouting “MIIMII!” over the parking lot. 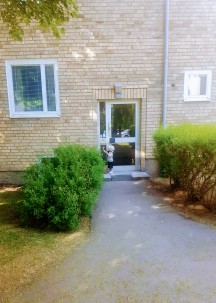 Stealing my keys and heading for the door. Trying to unlock it but he’s (luckily!) about half a meter too short. Then the tantrum, shouting “Miiimiii!” If she was here he would probably love to sit still though.

Moomoo ( =mormor, which means mother’s mother in Swedish. Although, according to Igge my dad, morfar, also goes under the name Moomoo.) and Miimii ( = Auntie Mary, my sister) have been helping us out a lot lately. When both Vegan-Dad and I have to work late, when I can’t take Igge to his song and dance class, when I have driving classes and Vegan-Dad is holding workshops… Moomoo and Miimii run the show.

And they really run the show. Igge is allowed everything he’s not allowed at home. He’s even allowed things I didn’t even know existed when he’s with Moomoo and Miimii. They take him out for fika (coffee and a bun at 3 pm, Swedish style) after the song and dance class and after picking him up from preschool.

Smoothie’s are the favourite fika for Igge. They’re sugar free so I’m fine with it. Cinnamon buns, however, are not.

They never take the pram (because they don’t have to be efficient) which means Igge gets to run freely. They never “shush” him when he’s copying a siren, they make the same sound themselves. But louder. If Igge doesn’t want to wear wellingtons when it’s raining – he doesn’t have to. According to Moomoo and Miimii there’s nothing as sweet as jumping in puddles barefoot. He gets to bake as well and to Miimii’s great delight he loves it. Loves eating the cinnamon and butter paste to.

Learning to bake cinnamon buns and sneaking some filling when it’s obvious that no one is watching (he only looks around his own height). FYI – There are no lemons in cinnamon buns.

When the weather is good they take him out to the summer house where they make sure he helps out. I’m trying everyday to make him help out, without success. But at the summer house he “helps” Moomoo and Miimii with everything they do. I have no clue how they get The Child to engage in all their activities but I won’t object. Once I found ice cream sprinkles in The Child’s diaper after he had spent the day with those two. They still claim that they don’t know how it got there…

Watching soap bubbles with Miimii on the yeti. Then helping out building a ladder out of the old birch. Most of the branches magically disappeared but the most important thing is that Igge was learning to help. Wonder if Miimii agrees with me.

Igge seems to have the time of his life, hanging out with Moomoo and Miimii, and Vegan-Dad and I are ever so grateful over all the help!

Then there are those new little details… 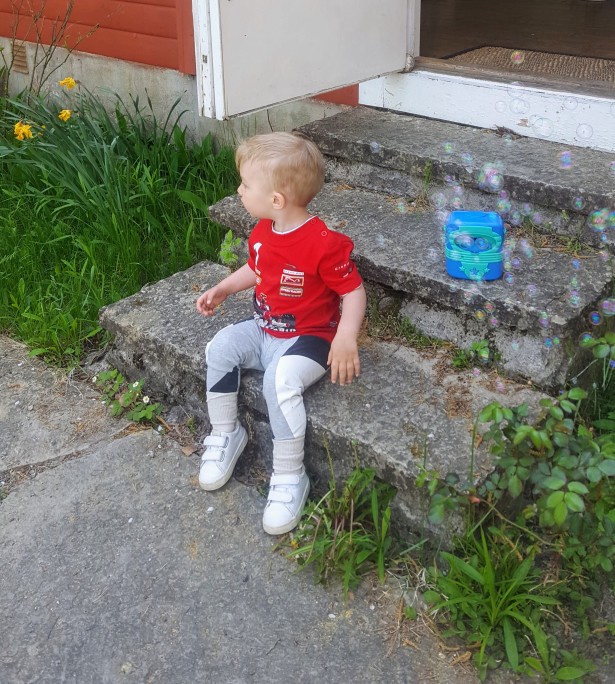 Sitting on the stairs with his new bubble machine, getting fed ice cream and buns and everything else bad for your teeth and vanes. This foreman keeps a hawk eye on the workers (everybody but him) and has no problem pointing out flaws in their work style. Nobody understands him but he seems happy enough. 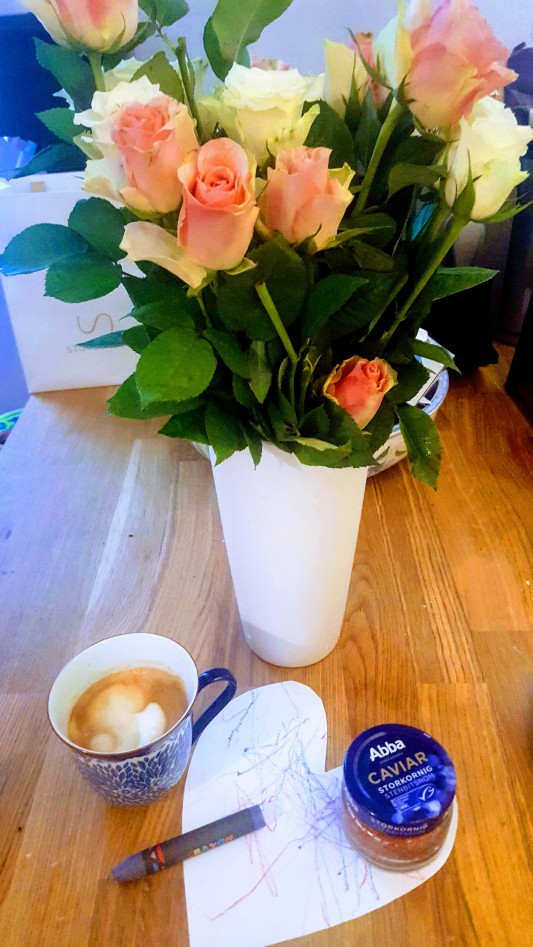 Today is Mother’s day in Sweden and I was celebrated this morning with a greasy spoon breakfast, which I love but never eat, coffee in bed, flowers and a gift that Igge had picked out for me. A jar of roe. Don’t know what to say – the boy knows me.

Of course I’m going to thank my mom for being strong and brave, for standing out with me and all my million siblings (sure, she chose to have a thousand kids but still), and for being a great role model, not just for her own children but also for our friends who stayed with us and for her grandchild. I love all the fun we have together and I hope I will get to be just as close with my child as he’s growing up. 🙂

Me and the best mommy in the world