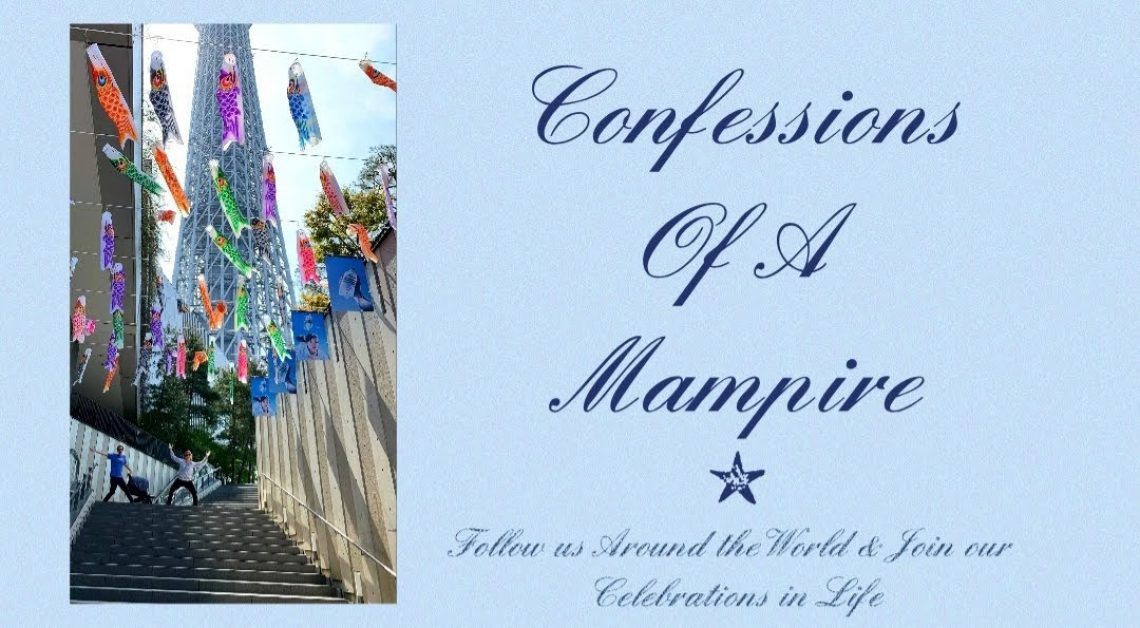 Fear has been around my life, well, all my life, but not to a very big extend. Fear of death, fear of getting hurt, physically and emotionally, fear of great change… They’re all fears that are natural to have as a mediocre human being. They’re rational fears. I have never reflected on the irrational fears, that most people also have, until the last time I flew in a plane. That’s when it hit me. I can no longer show my fears, unless they’re actually justifiable. Showing my irrational fears will pass them on to the child – making him irrationally afraid of stupid things.

The Child had a blast the whole way

So we we’re finally, finally, (not) packed and (not) ready to leave our big cottage in the Swedish mountains to go back home. One thing which made the trip harder this year compared to previous years was that our child doesn’t like to be in a car. He hates being strapped in. In his pram it’s ok because he can flirt with old and young ladies and interact with other children and being strapped in in his food chair is fine because, let’s face it, that’s where the food is. But in a car seat – no oh. Constant screaming for 10 hours, I don’t think so. Flying turned out to be the best option and our trip to the mountains was incredibly smooth! As we were going home, the sunny, crisp weather turned into the snowstorm Cora. We could barely see our own hands in front of us as we were walking to the bus (which would take us to the airport two and a half hours away) with bags, backpacks, the diaper bag and carrying the baby in his car seat. It might sound like an easy task but Iggson had eaten too much Christmas food and had likely doubled his original body weight. 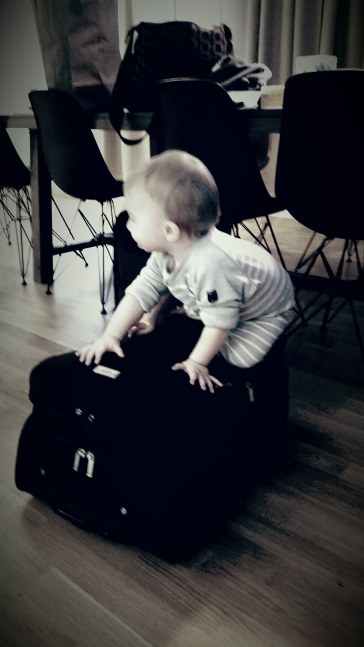 Iggson is guarding his bag. Which he later managed to open and empty the day of departure.

On the bus we got a phone call saying our flight was cancelled due to the storm, but they would deliver us with a taxi to the next airport, two hours further along the road. There came the first wave of unexpected fear over me. Why would the weather be better two hours further away? How is it safer to fly from that airport? I’ve seen both of them, they both have the check-in, security and coffee machine at the same and only desk in the entrance hall. Which is also the waiting hall and the lunch room for the staff.

Majestic airport. Yes, this is all of it.

We got to the airport, checked in and jumped in to the taxi along with the other six passengers who were supposed to be on the same flight. One boy looking like he was twelve, three angry, delayed business men and another pair of parents with the same problem as we have – a baby who hates going in a car, strapped in. When the dad to the other child and I both strapped our squirming babies in their car seats we looked at each other and nodded. Nothing more was needed to be said. That nod said “good luck”, one exhausted travel-parent to another. Actually, both the babies took a short look at each other, smiled, and fell asleep. The whole car trip. Neither of us parents woke our babies up, despite the strange nap time since we were eased and relieved. The snow storm was now quite messy and the driver was driving way too fast. The roads in the Swedish mountain forests are tiny and wriggly and you have to slow down if you meet a car as small as Beetle, but not this taxi driver, no. Add to the story that the snow storm had made walls on both sides of the road, taking space from the lanes on both sides. Here is where my next wave of unexpected fear comes over me; the driver drove insanely fast, the snow flakes attacking the car were more frequent than hippies visiting Christiania in Copenhagen, we met an enormous timber truck and nobody was slowing down. I remember a mantra “we’ll make it. We’ll make it. We’ll make it…” spinning on repeat in my head. I couldn’t watch the potential disaster so I turned my head to look out the window – where I saw a giant moose running slalom around the trees in the forest. The roads have no animal protection fence and he might go slalom on to the road at any second. I’m glad Iggson slept because I needed to focus on not fainting from fear. Next to me sat Vegan-dad with closed eyes and earphones stuck in, softly jammin’ along, totally unaware of the surroundings.

In the taxi before it got dark outside. Nothing surrounding us but snow and moose.

Finally we arrived at our destination, the prominent airport of Mora. We were eight tired, stressed and delayed people anxious to board and get home, but security first. One lady checked us in, then she changed her jacket, ran ahead of us to the security check where we all had to go through security. She stopped me and jokingly said “you’re the random number 10!” and I thought that we’re not even ten people going on this plane, but I let her go ahead and frisk me. I’m always the random number ten. Do they not see that I’ve got a fat ass and that I’m not trying to hide explosives in my jeans pockets? Anyways, after security check the lady changed jackets again, ran ahead of us to stand by the gate and tear our boarding passes. We boarded the plane which took off while the back door was still closing and the baggage lady (the same lady from before but now with an overall on) was still throwing bags in. Take off went fine under the circumstances, windy and bad sight but swoosh! and we were above the clouds. All went great until it was time to land. The winds were still really strong even though the snowing had stopped and I started to feel a bit warm and queasy. The pilot shouted from the cockpit on broken English: “iss goin to be bomby! Strange pressür here!” and then he laughed the same kind of nervous laugh I do when I’m at a job interview. One of the buttons in the cockpit started to blink red. And going “eeeee eeeee eeeee”. And the plane which was tilted forwards for coming in for landing all of a sudden got thrown upwards. And then the pressüüüre pressed us up up up – to fall straight down. And the wind threw us from side to side while the walls in the plane gave away clucking noises. And the red button in cockpit kept shouting like a war alarm. At this point I’m not up for more surprises, but since the seats were so small I was leaning towards the wall for extra support. I become very aware of that there’s a draft on my arm which was leaning towards the window and as I look at it I see that there’s quite a big glitch in between the window and the wall. My eyes wander up and I discover that I’m sitting by an emergency exit. Which clearly has been used once or twice before. The “pull here” – handle had definitely been pulled and fixed with glue and gaffa tape, then painted white. Now fear was there. No wave of fear, it was constant.

The view from my seat on the plane on the way back to Stockholm. Pitch black and full of nasty surprises.

I’ve travelled all over since I was really young and I’ve never ever been scared of flying. Then once, a landing in Barcelona went very wrong and we almost crashed, which lead to me getting minor nervous break downs whenever I was flying anywhere. This went on for a few years until one day I got sick of it and started to deal with the problem. I still find it uncomfortable at times but I haven’t been scared of flying for at least three years. All of it came over me now and I was sweating so much I probably absorbed all the moisture from the cabin so I could sweat some more. In my head I thought that I have to see my beautiful child and my awesome husband once more before death comes to collect and I turn around to see… Vegan-dad still jammin’ away like every flight is like this and Iggson going “Aaaaay! Aaaaaay!” doing the wave along with the other baby on the plane every time the pressure drops and releases the plane a few hundred meters. (Someone at our New Year’s Eve party thought that it was cool to teach him and now he does it every time it’s really inappropriate.)

This was when I realised that I can’t show my fears to my child. He was obviously not scared one bit but if I showed that I had sweated through three layers of woolly jumpers and my face was as more green than white, he would probably get scared of flying. He would get scared of anything I project on to him. Maybe the flying fear will be easy to keep to myself cause I either die or I don’t, not much to do about it. My fear of birds is also one that doesn’t have to be a problem; I’ll just avoid them as much as I can. My fear of falling and breaking bones is rational, because I’ve done it so often. But my fear for slugs on the other hand… That will be a challenge. In the summer in Sweden, they’re everywhere. We’ll have to move.

It took me forever to actually write something under this picture – the soul picture of a slug makes me want to cry and/or vomit.

Being a parent means you have to respect your child enough to keep your own fears in so the child can develop fears all on his own. His own irrational, made up fears that makes no sense to anyone but him.
I hope Iggson never becomes afraid of flying or falling or slugs, but I actually want him to be afraid of war, guns and transfats.

Despite the fact that my child loves water, he’s actually afraid of the sound of waves.