I’m the oldest of about half a dozen kids. When we grew up we never wanted my sister Mary (she’s the youngest of the bunch) to play with us – because she was a marauder. I haven’t realised it until now, when I have a child in that age, but there is actually a developmental phase called The Phase of The Destroyer. No, I haven’t read it anywhere. Call it a life observation, a study of natural behaviour if you like. I remember it so clearly, being quite a bit older than my youngest sister, how we had built a fort in the play room using every pillow in the house. We had the greatest time and then came Mary and wanted to play with us, of course. As she began to wobble towards the majestic entrance of our fort made out of mom’s pink 90’s silk pillows, we all screamed in shear panic.
“No Mary! You can’t be here! You’re a destroyer! Mom! MOM! MOOOOOOM!”

Mom was busy filming this while saying “everyone can play” in her sweet voice. Mary didn’t care about our devastated, desperate calls for help that came from our plastic knight helmets. As she came closer to the shimmering, old pink entrance getting ready to start crawling inside, we all hid our faces in our hands and the silence was so thick I thought I had gone deaf.
Two of my brother’s burst out “it was our best fort yet.”
“It was. It was also nice knowing you.” Then they hugged like Doomsday was here. And it was.
Mary was now so close that we could hear her giggles echoing in the isles. Her somewhat brutish crawling style and enormous diaper wiggled from side to side. The fort’s walls were erased, as she worked her butt thorough the secret catacombs, which we had spent a whole Sunday building. I’ve never seen such a happy little face pop up inside the Tower made of a giant cardboard box. The rest of us had been standing there, helplessly watching the slowest bulldozer in history working away. She was leaving nothing but piles of pillows behind her – The skin of a snake made out of velour and silk in pastel colours. She was so happy though. Completely and utterly unaware of the tears and broken spirits she had created. She was in the development state which I call The Destroyer, or The Marauder.
That’s where my son is now. When purposely destroying things is the most fun occupation in the world. It took me a few days to realise that that’s the phase he’s in right now. He’s tearing anything and everything apart with the highest level of concentration, then laughing about it so much he falls over and finally collecting the pieces to proudly show me what he’s done.

Sometimes words are not enough. Sometimes you have to show people what you’re talking about. So this time pictures will tell the story. Or as I call it – evidence.

Has any Christmas tree ever gone untouched by a one year old? I don’t know exactly how many bubbles he broke before we moved all the decorations to the upper half of the poor tree. Worse was it for the gifts. He thought they were all for him and didn’t leave many unopened.

I got a pair of fun and super cosy slippers for Christmas. I had worn them for less than five minutes when The Marauder tore one of the bows off. It’s not all bad though, now I can separate left from right.

After we got home from our Christmas trip this developmental phase escalated. Now everything’s constantly in danger.

I was getting something from the bathroom and he followed me. Our presence in there was less than 30 seconds and I swear he looked empty handed when we left. Apparantly he had brought most of the toilet roll with him, which he carefully tore apart in tiny tiny little pieces and spread around the apartment while I was doing the dishes and didn’t take notice of him.

I wrote a list of preschools in the area and their pros and cons. He tore it apart and ate it.

My best lip balm and the only one that helps my lips in the dry, cold and dark Swedish winter. I do allow him to play with it when it’s closed because he can’t open it. Sorry. He couldn’t open it. While he was at it he also made a piece of phallic art.

Salty sticks is a classical Swedish snack. They are SO difficult to clean up when they crumble though. SO difficult! Especially when they land on a long-haired-woven rug which isn’t yours so you really have to get every last crumble up.

As the Child has grown yet another size I was sorting out his closet. Perfect, clean, folded piles are really attractive Marauder targets.

“It’s okay mom, it’ll fit if I press it down some more. Ops.”
The toy box is not made to contain chubby babies.

He loves drawing. Try drawing ON THE ACTUAL PAPER, child!

Oh the biting. It drives me insane! Don’t know what to do about it, really. This one takes chunks of every piece of cloth that crosses his path. Most moms have clothes with stains on them – my clothes all look like Swiss cheese.

Your thinking is correct – the gate doesn’t bend that way. 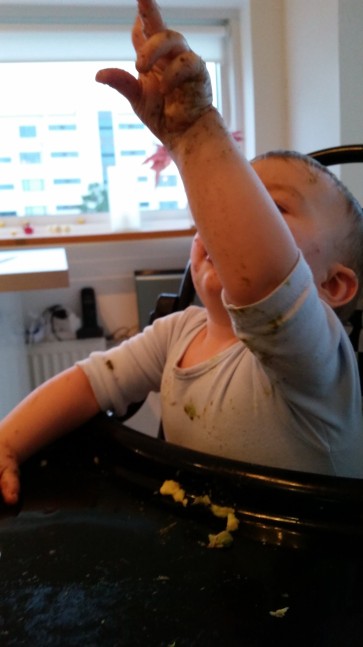 Oh yeah, I saved my favourite for last. Take a guess what’s on the ceiling. I’ll give you a clue – it’s neither white nor easy to get off.